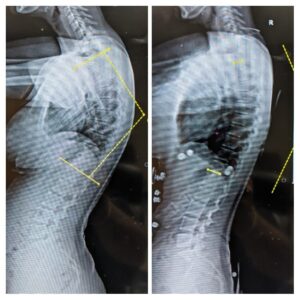 Scoliosis is a condition in which the spine curves in an abnormal manner on the coronal plane. This causes it to twist sideways. The most common cases are known as idiopathic scoliosis because the cause is unknown. In kypho-scoliosis, the spine curves unnaturally on the sagittal plane, which causes the spine in the upper back to twist forward or backward, commonly resulting in a humpback or roundback. While some people suffer from congenital kyphosis, meaning they were born with the curvature, postural kyphosis is the most common and often presents during adolescence as a result of slouching and poor posture.

While many patients suffer from scoliosis or kyphosis, there are also those who suffer from both sideways and forward or backward spinal curvature. This abnormal spinal deformity is known as kyphoscoliosis.

In most cases of kyphoscoliosis, the cause of the deformity is unknown. It can occur at any time in a person’s life – including at birth – and the symptoms vary significantly. Some people only experience an unusual slouch or hunch in the thoracic spine area while people dealing with more severe cases may experience heart or lunch problems as a result of an extreme spinal curve.

At Denver South Chiropractic & Rehab, we provide advanced research based treatments for kyphoscoliosis in Denver and are here to help patients overcome many different types of spinal deformity affecting both the lower and upper back.

When you visit Denver South Chiropractic & Rehab, we will reach a diagnosis based on your medical history, a physical examination, and diagnostic imaging. In most cases, we use X-ray technology to take a close look at the lumbar and thoracic spine and measure the angle(s) of curvature of the spine. X-rays are also used to monitor progress and curve progression once treatment for the condition has begun.

Early detection is the key to successful treatment. Doctors, pediatricians, and even some school doctors look for signs of scoliosis and kyphosis beginning in early childhood. If you have any reason to suspect that your child may have one of these conditions, though, it is important to have them evaluated by an expert right away. Likewise, you should seem prompt treatment if you feel that you are developing any sort of unusual curvature in your spine.

Treatment for kyphoscoliosis is often recommended based on the symptoms a person is experiencing. Pain is the most common complaint with this condition, and in many cases, this can be alleviated through using combination of techniques such as CLEAR Scoliosis Method, Chiropractic Biophysics, Schroth Scoliosis Method, Scientific Exercise Approach to Scoliosis, 3D Kypho-Scoliosis bracing, Pettibon technique, postural exercises, physical therapy, and/or chiropractic adjustments. Surgical treatment is usually not recommended for kyphosis or kyphoscoliosis, except in extreme cases. In the rare cases where surgical intervention is warranted, spinal fusion, in which the vertebra are fused together, is the most common option.

At Denver South Chiropractic, we rely on several Kyphoscoliosis research based therapies along with KyphoScoliosis bracing, and other non-surgical techniques to reduce and stabilize your curves. In many cases, we can achieve significant curve reduction in as little as 90 days of treatment. To learn more or to schedule an appointment, please contact us today!